COQ10 has risen in popularity lately, especially after a study found that supplementation resulted in improved sperm motility and sperm count. But what is COQ10, and can it help with male fertility?

There are lots of supplements that benefit the reproductive system, both male and female. One, in particular, has a few recent, well-documented studies that show it may boost fertility in men. It is COQ10.

Unlike other herbs and supplements, many doctors approve COQ10 for fertility as its benefits are backed by research. It is an antioxidant that is found naturally in your body. Like other antioxidants, it helps to protect cells from damaging free radicals. This protection is one of the reasons why it may have a positive effect on sperm motility and quality.

What Exactly Is COQ10?

COQ10 can sound a bit intimidating because of its acronym-like name. But this is just the simplest way to refer to the compound, also known as ubiquinone or coenzyme 10.

It is found in humans and animals, one of the few natural antioxidants your body produces. COQ10's job is to support metabolism and protect cells from damaging free radicals. Free radicals are really just unstable atoms that happen as a result of bodily processes but also from pollutants and chemicals. Once inside your body, they can be damaging to cells, causing illness and aging. This damage can extend to male sperm.

Because COQ10 is lipid-soluble, meaning it can dissolve and be used by your body, it is commonly found in cell membranes. There, it attracts lone electrons to help protect cells from unstable atoms with an unpaired electron. When the unstable atom meets the lone electron, it becomes balanced and non-harmful to cells.

Its protection is what helps to enhance sperm quality, motility, and even sperm concentration.

Treatment for male infertility depends on the issue. Some cases of male infertility may require medical intervention such as hormone therapy or surgery on the varicoceles (swollen veins in the scrotum). This type of treatment is often the case if low levels of testosterone are harming sperm production or the swelling of the varicoceles is prohibiting sperm from being ejaculated during intercourse. Alternatively, lifestyle changes like including supplements may be able to help by naturally balancing hormones and working to protect the body from harmful compounds like oxidative stress. Interestingly, COQ10 can help with a variety of these factors concerning sperm.

Sperm quality is essential. You want the sperm that fertilizes the egg to have excellent DNA quality to help ensure the chances of a successful and healthy pregnancy. Men that have high DNA fragmentation levels face lower chances of conceiving. When it comes to DNA fragmentation in spermatozoa, scientists believe oxidative stress plays a significant role.

COQ10 is a potent antioxidant, helping to negate the effects of oxidative stress. Therefore, it may help improve sperm quality and reduce DNA fragmentation. In turn, this might improve a man's chances of conceiving.

COQ10 waits in cell membranes, neutralizing free radicals and preventing damage. One study found that three months of supplementation with COQ10 improved semen parameters. Researchers also determined in another study that COQ10 supplementation helped reduce the number of reactive oxygen species (ROS). The lower ROS resulted in less sperm damage. Sperm cells actually generate ROS, but the cells' antioxidative systems usually remove it. If they become overwhelmed, which is a possibility, male infertility can be a result; or at least decreased sperm quality. COQ10 can help neutralize the free radicals and reduce the ROS that is harming sperm.

Participants in these studies often had increased fertility as a result of reduced DNA fragmentation and better sperm quality.

Researchers know that COQ10 has a profound effect on sperm motility. Increased motility after COQ10 supplementation is thought to be related to its antioxidant properties as well as its ability to support cellular energy production. A motility boost of 25% was recorded after one study. Men with asthenozoospermia, or reduced motility, had the most significant positive results.

It found that motility improved overall, and the sperm was rapidly motile. Non-motile, as well as sluggish sperm, was much improved. Experts believe that regular COQ10 supplementation brings below-average sperm up to standard or even above-average motility levels.

Improved motility is a considerable part of fertility. To move through the reproductive tract and fertilize the egg, a man's sperm must be able to swim efficiently. COQ10 may offer just the boost

While it only takes one sperm to fertilize an egg, a high sperm count can help improve a couple's odds of conceiving. Sperm concentration is how many sperm are concentrated within semen, also known as sperm density. Also, low sperm count may signal underlying health issues and poor sperm quality.

Men who supplemented with COQ10 as part of a study experienced a 53% increase in sperm count after taking the supplement for six months. COQ10 supplementation improved sperm concentration as well. A study published in the journal Fertility & Sterility found that men with decreased sperm count had lower levels of COQ10 in their seminal fluid prior to the survey. After six months, they had higher levels of COQ10 as well as improved sperm density. This led the researchers to conclude that COQ10 positively affects sperm count and concentration.

The higher the sperm count, the greater the number of sperm available to fertilize the egg, ultimately boosting male fertility.

Sperm morphology refers to the size and shape of sperm. It is one of the various parameters evaluated during a sperm analysis because sperm of an abnormal size or shape can have difficulty fertilizing the egg, reducing a man's fertility. Abnormally shaped sperm can have a head that is too large or small or even two heads. Sperm that is missing a tail will not be able to swim.

Though many different factors can affect sperm morphology, it's thought that oxidative stress may play a role. Because COQ10 has antioxidant properties, it can typically help reduce the effects of oxidative stress and, therefore, maybe enhance fertility by improving sperm morphology. While studies have shown modest results, from 22.17% to 23.64% in one study and from 24.64% to 27.41%, COQ10 does seem to benefit nearly all sperm health parameters.

There are many benefits of coq10 for fertility. COQ10 for sperm count, COQ10 for sperm morphology, and COQ10 for sperm motility have all shown positive results in medical studies. While some parameters were more profoundly affected than others, COQ10 still benefited all aspects of sperm health in randomized studies.

Healthy sperm is essential for fertility. Adding a supplement containing COQ10, along with a healthy lifestyle and dietary changes, may improve your chances of conceiving.

Freshly Moms Fertility Formulas for Him contains coenzyme q 10 along with other herbal ingredients to promote sperm quality and boost sperm quantity. Our supplement can be an effective part of a preconception routine for both males and females and the easiest part of your day, thanks to our easy-to-swallow capsules!

COQ10 is considered a dietary supplement. In the United States, dietary supplements are not regulated by the U.S. Food and Drug Administration like medications are. Therefore, they are not as extensively researched or tested. However, as long as you purchase your supplements from a high-quality manufacturer, COQ10 is likely safe.
There are limited side effects that can occur with COQ10 supplementation. They generally happen with increased levels of COQ10 supplementation and can include:

It's always important to talk with your doctor before starting any supplements and discontinue them if you feel unwell. 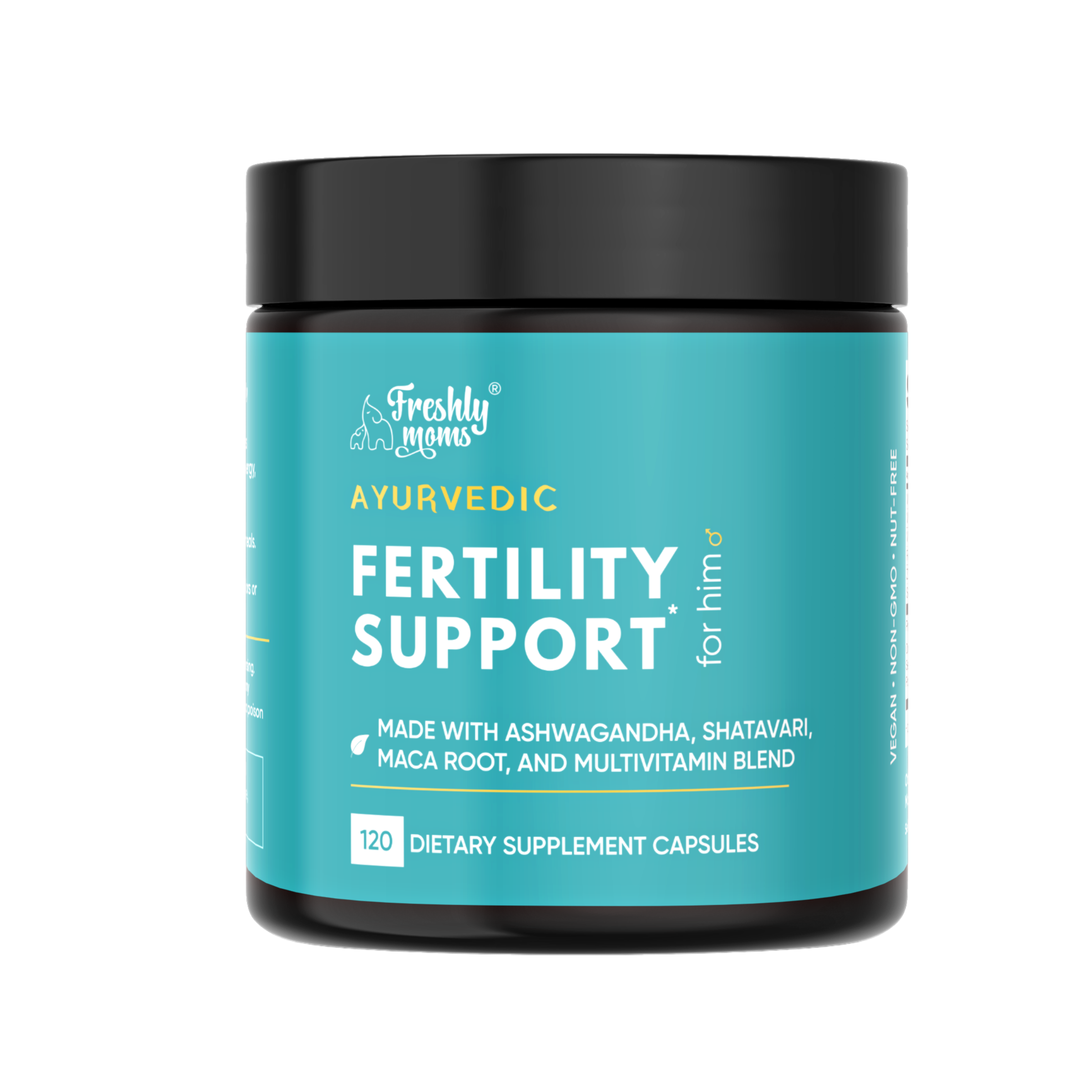 Fertility Support for Him with CoQ10

A fertility support developed by experts. This supplement contains a blend of Ayurvedic herbs and vitamins including CoQ10, Ashwagandha, Mucuna, Maca, Zinc, and Selenium.

This article is not a medical advice and is not meant for every situation. Every man's body is different and may respond differently to supplements.