Each stage of womanhood brings with it a particular set of challenges. From puberty to pregnancy, postpartum, and menopause, our bodies go through quite a bit! With each transition, our hormones fluctuate, and this can result in some not-so-pleasant side effects. Even your monthly cycle spurs a sudden rise and fall in hormones, and we bet you’re all too familiar with what that means for your body and mood.

But what if I told you that there is an Ayurvedic herb that can help support you through all of these changes and cycles? One that has been relied upon for centuries to balance hormones, lower stress, and nourish your reproductive system. The supplement I am referring to, sometimes known as the queen of herbs, is none other than Shatavari.

Shatavari is a plant native to India, Asia, and Africa. Its scientific name is asparagus racemosus, and if you have ever seen wild asparagus, Shatavari’s foliage bears a close resemblance. It grows in shady, low-lying elevations and has been harvested for thousands of years. It is pronounced shot-uh-var-ee, a word meaning “she who possesses a hundred husbands”.

The root of this adaptogenic herb is ground up to produce Shatavari powder, which can then be consumed. As an adaptogen, it is considered to be great for the overall health of both males and females. But as the translation of its name suggests, it is particularly beneficial for females when it comes to hormonal balance.

The Queen of the Herbs

Why is Shatavari referred to as the queen of herbs? The supplement is said to produce feelings of love and devotion. This could stem from the fact that it is somewhat of an aphrodisiac, boosting a woman’s libido.

But it isn’t just useful for fertility. It is a powerful addition to a lady’s routine throughout every stage of womanhood. It has positive effects on lactation, postpartum recovery, and even menopause.

Additionally, Shatavari may encourage the production of prolactin. Prolactin is responsible for a woman’s libido and breast milk production if she is nursing.

The way in which this hero herb helps with hormonal balance translates to many positive side effects for us women.

It is never too early or too late to add this female rejuvenative to your diet. Here’s why! 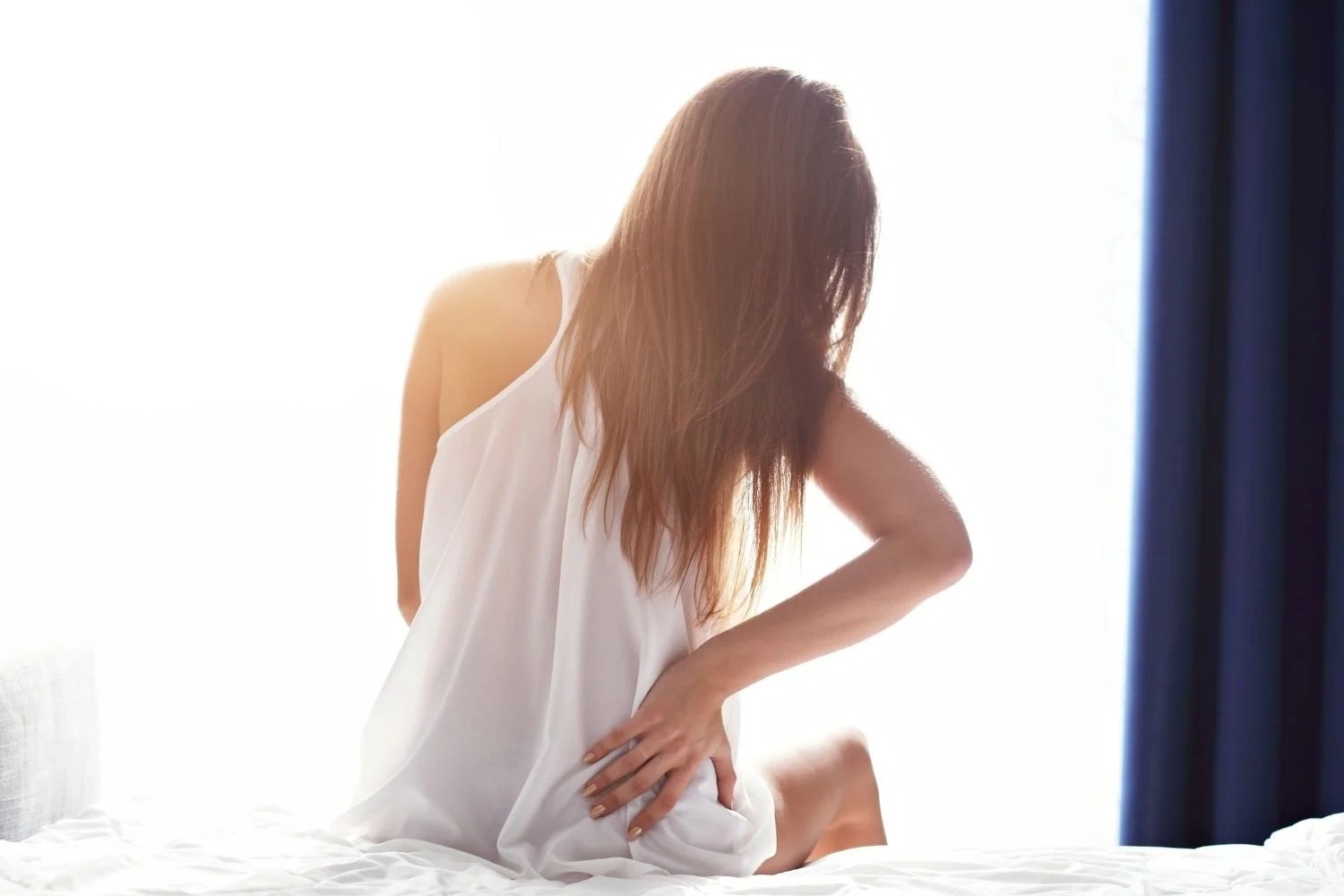 Decreases Symptoms of PMS and Menopause

Shatavari is an anti-inflammatory, which means that it helps to decrease inflammation in your body and relax tissues. When you are on your period, the muscles of your uterus can be quite inflamed and agitated. Cramps are a side effect of this as your body tries to expel menstrual fluid. Shatavari and its composition of saponin, a uterine relaxant, might be able to help relieve cramping and soothe stomach pain.

Those suffering from PCOS may find that Shatavari helps to alleviate symptoms, prevents new cysts from forming, and maintains a regular menstrual cycle.

Mood swings are yet another side effect of PMS and menopause. A drop in estrogen during your cycle or menopause equals lower levels of serotonin. And what does decreasing serotonin lead to? You guessed it, moodiness, irritability, and anxiety. Shatavari powder plays a role in serotonin and gamma-aminobutyric acid (GABA) systems; ultimately reducing anxiety, irritability, and depression. Exercise and spending time outdoors in conjunction with Shatavari can boost your mood when your menstrual cycle has you feeling down.

Shatavari is both a moistening and cooling herb. One study found that its cooling properties help decrease hot flashes in women going through menopause. It may also help alleviate vaginal dryness and itching. 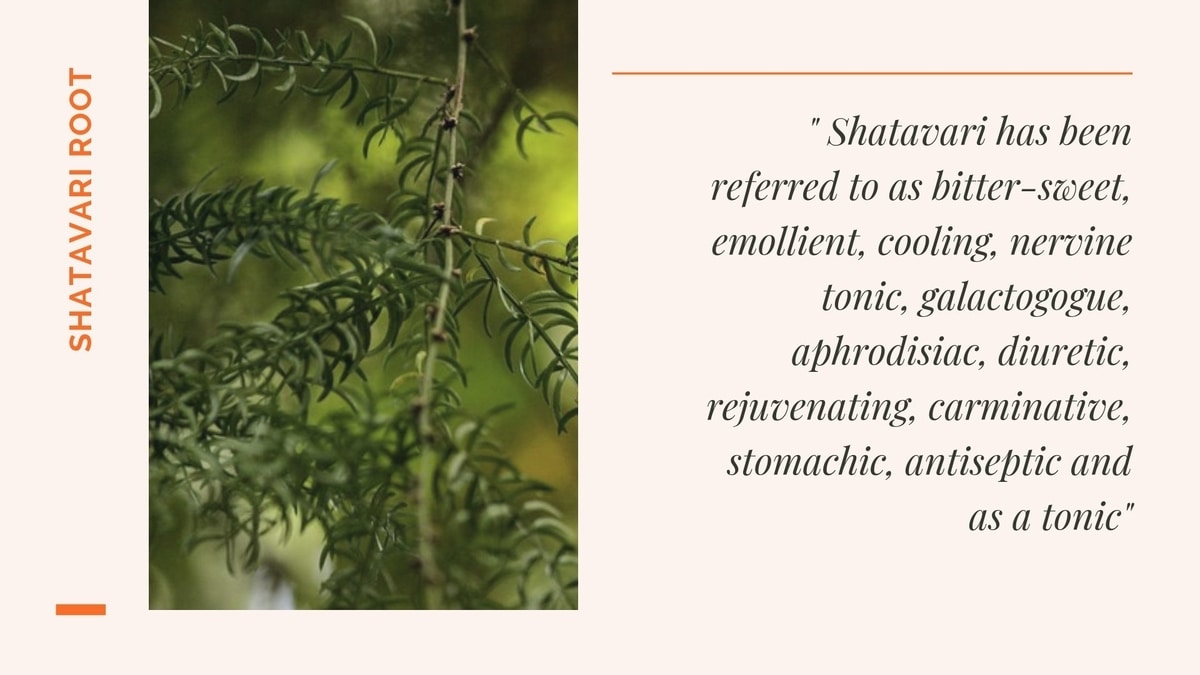 We have already touched on the topic of how Shatavari boosts libido. As an aphrodisiac, you may experience an increase in your sex drive when taking this herb. Additionally, as mentioned it can help decrease vaginal dryness, an important factor when engaging in intercourse.

Shatavari is believed to help establish good blood flow. Its cooling properties may boost plasma and white blood cell count. Both of these things are great for conception when your fertilized egg is bedding down in your uterus.

The fertility benefits don’t stop there though. Shatavari plays a role in the production of estrogen, which in turn can help increase levels of luteinizing hormone, or the hormone responsible for ovulation. When your hormones are balanced your cycle may regulate, making it easier for you to know when ovulation occurs and conception is possible.

Increased stamina and sex drive, a healthy reproductive environment, and a regulated cycle make Shatavari an excellent herb for those struggling with infertility or hoping to conceive sooner rather than later.

Ayurvedic Fertility Support for Her

Fertility support developed by experts. This supplement contains a blend of Ayurvedic herbs and vitamins, including CoQ10, Shatavari, and Ashwagandha.

Great for Pregnancy, Postpartum, and Breastfeeding

Shatavari is nourishing and as we now know promotes blood flow. Both of these characteristics can be wonderful for mother and baby during pregnancy. But don’t forget to consult your doctor before taking this herb!

After the birth, your body will need support to heal and recover. Shatavari can help. Its anti-inflammatory properties, ability to balance hormones, reduce stress as an adaptogen, boost your immunity, and increase strength and vitality are all amazing benefits to the postpartum mother.

Shatavari is a galactagogue too! Studies have shown that it had a positive effect on milk production. Ayurveda has long suggested the herb to nursing mothers as it increases the milk-making hormone, prolactin naturally.

Freshly Moms Organic Chocolate Drink Mix is the easiest and the most effective way to naturally boost milk production.

What Else Can Shatavari Do For You?

Adding Shatavari to your diet is a must for any woman; but if you’re still unconvinced check out all these additional benefits:

A woman of any stage or age can certainly benefit from this superhero herb!

Hormonal Balance & Mood Support with Shatavari is made to support women post-childbearing and breastfeeding by encouraging a return to balance and promoting wellness from the outside in.

This article is not a medical advice and is not meant for every situation. Every woman's body is different and may respond differently to supplements.